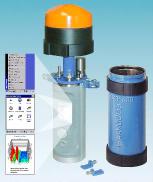 In close co-operation with Aanderaa Data Instruments (AADI) we arranged a test of RDCP600 with NERI (The National Environmental Research Institute, also named DMU), and Jens Larsen as perator.

NERI wanted a test of RDCP600 within Current Speed/Direction, Water Temperature, Conductivity and Oxygen, measured from a special box, placed at the bottom. An 3835 Oxygen Optode had been connected to RDCP600 as external sensor for the test.
The operator was very satisfied with the instrument and got high quality data out from the test.